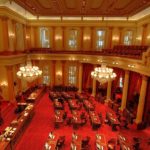 A piece of legislation working its way through the California legislature will shine a light on drug prices by requiring advance notice on drug price hikes and ensuring public access to spending data.

Advocates of the legislation hope that shaming drug companies will drive prices down.

An editorial in the Los Angeles Times explains that despite decreases in healthcare spending in the U.S. in recent years, spending on prescription drugs has continued to rise. “The amount spent on prescriptions has climbed sharply over the last 2 ½ years, driven in part by consecutive years of double-digit price increases,” the article points out. “It’s not just a handful of blockbuster drugs that are draining wallets; it’s higher costs for all categories of drugs.”

In the last few years, pharmaceutical companies have come under fire for exorbitant price hikes that have no apparent justification. Martin Shkreli, former CEO of Turing Pharmaceuticals, raised the price of a drug commonly used on HIV patients from $13.50 per pill to $750 per pill, sparking viral outrage and rendering himself a public villain.

Sovaldi, a specialty drug for Hepatitis C that came onto the market in 2014, costs $80,000 for a course. Kalydeco, a drug from Vertex used to treat the underlying cause of cystic fibrosis, costs $300,000 a year. An article in the Boston Globe argued that Vertex’s prices are being scrutinized because they are a symptom of a broader ailment plaguing the healthcare system: the dilemma of “how to hold down health costs while rewarding makers of treatments for relatively small numbers of patients.”

According to the Kaiser Family Foundation, a quarter of people taking prescription drugs have trouble affording them. The current situation is an unsustainable system that could bankrupt government health programs and patients alike. While prices of all drugs are rising, including generics, the biggest culprits are drugs made by companies that hold patents on specialty medications.

“I am proud that my colleagues came together to support transparency and affordability in the healthcare system,” said Senator Hernandez. “California has been a leader in providing access to healthcare, so now it’s time to shine a light and bring drug pricing out of the shadows.”

“The big pharmaceutical companies shouldn’t be able to raise prices on a whim without any warning or telling anyone why,” said Anthony Wright, executive director of Health Access California, for a release on Senator Hernandez’s website. “Without more transparency, drug prices will just continue to go up… making the health care system prohibitively expensive for all of us.”

The issue is a hot-button topic not just in California, but all over the nation. Both Hillary Clinton and Donald Trump have spoken out against “predatory” drug pricing.

In the midst of the growing alarm over drug spending, there’s a contingent that thinks the problem may be exaggerated. According to an article in Fortune, “there’s growing evidence that the controversy may be more smoke than fire.”

“Often it turns out that the price increases by Valeant [Pharmaceuticals] and Turing [Pharmaceuticals] that have provoked the most criticism have been on drugs that are off-patent,” the article continues, “meaning generic competitors are free to enter the market, typically bringing the price that most people pay for the drugs way down.

Despite this perspective, the majority of stakeholders are hoping and fighting for change. In November, Californians will vote on another bill focused on drug pricing, which would prohibit the state from paying more than the U.S. Veterans Administration pays for drugs. And for now, advocates of SB1010 will go head to head with the pharmaceutical industry until the fate of the bill is decided.