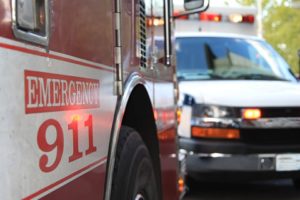 Autumn thus far has proven tragically eventful for this country. First with devastating hurricanes in three different regions, and then, here at home, a series of wildfires, some of the largest in the state’s history, killing 42 people and leaving more than 50 unaccounted for.

During natural disasters like these, there’s a risk of taking healthcare for granted. This is, after all, the time when people need hospitals most. But the California wildfires have done more than wreak havoc on the private sector — they have dramatically disrupted the healthcare system as well.

Two of the largest hospitals in the northern Bay Area had to undertake the monumental and incredibly complicated task of evacuating patients earlier this month.

Around 130 patients of Kaiser Permanente’s Santa Rosa Medical Center were relocated as a trailer park adjacent to the facility was consumed by wildfire, flames eventually leaping onto the hospital itself. Most of the patients were resettled about 40 miles south, in Kaiser’s San Rafael Medical Center. Some, however, had medical needs that warranted specialized care that other facilities could provide.

The Sutter Santa Rosa Regional Hospital was also forced to send its 77 patients at the time to safety when fire encroached. Facilities in San Francisco, Oakland, Berkeley, Novato, and Santa Rosa took in the evacuees, which included pregnant women in active labor and infants with medical issues severe enough that they had been in Sutter’s intensive-care unit when fire made staying put impossible.

And of course, large healthcare facilities weren’t the only ones forced to close their doors when fire invaded. More than a dozen medical clinics in the northern Bay Area had to shut down during the worst of the fires.

Healthcare professionals at work despite threat to — or loss of — homes

It’s hard to imagine focusing on work when your home is under threat or when you know you’ve lost your home. But that’s just what many in the healthcare industry so valiantly did during this nightmare.

In all, over 100,000 Californians have been forced to leave their homes. Some will have homes to go back to — albeit badly damaged — and some will return to nothing but the land itself. And of course that number includes many healthcare professionals.

“It touched really close to home for all of us,” Allen told Modern Healthcare. “Whether you lost your home or not, you know someone that did.”

D.C. passes relief measure … but will it be enough?

Sutter Santa Rosa Regional Hospital reopened on October 17th, eight days after the evacuation. The bulk of the clinics in the area have also resumed operation, with the remainder slated to reopen next month. As of now, Kaiser Santa Rosa is still closed (and its website says it will be closed “until further notice”); it is offering financial help and temporary lodging to employees who have been displaced from their homes.

Earlier this month Congress passed an emergency disaster measure that includes $576 million for recovery efforts and wildfire relief. And the Senate proposed a bill that would grant $100 million to areas with high risk of wildfires in order to improve readiness and disaster response.

Although no one in the industry is rejecting those efforts, some say there is much more to be done in the present moment to ameliorate the dangerous chaos the fire has caused. For example, there are thousands of displaced Californians now in shelters who were evacuated so abruptly that they couldn’t manage to get their hands on their necessary prescriptions (or those medications have since run out).

“So, you have these people who are scattered all over the county,” Jeff Gerard, president of Sutter Health Bay Area told Modern Healthcare, “and trying to ensure that we were meeting the medical needs of those patients as well as the ones that were in our hospitals was probably even more difficult than the hospital patients. We at least knew who the hospital patients were.”

“The rebuild coming out of an event like this,” Gerard added, “is not something where you just return to normal.”