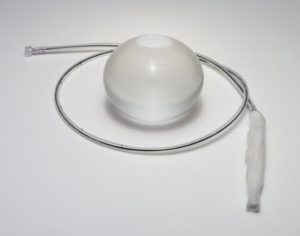 Intragastric balloons are medical devices used to treat obesity. Inserted into the patient’s stomach and then inflated and filled with a saline solution or other liquid, the silicone balloons constrict space within the stomach. With less room for food, the patient’s appetite is curbed and ideally, weight loss is the result. Intragastric balloons can remain in the stomach for a period of no longer than six months.

Last month the U.S. Food and Drug Administration (FDA) sent a letter to healthcare providers warning them of potential risks associated with the devices and/or the placement procedures. The new information presented by the agency included the news of five patient deaths soon after balloon insertion. Beginning in 2016, three of the patients died within three days of having the device placed, the other two within a month.

Further, the FDA reports that two additional deaths occurred, but it is unclear whether those were directly caused by the intragastric balloon device itself (the incidents involved a gastric perforation and an esophageal perforation).

Apollo Endosurgery released a statement noting that the company had voluntarily disclosed the fact that since FDA approval, five patients died after the procedure to insert the Orbera intragastric balloon. And going further back, Apollo said that over a quarter of a million Orbera devices had been sold over the past decade, with 21 deaths reported in all (an incidence rate of death of less than 0.01%, as the company pointed out).

In a statement released on the same day of the FDA letter, Todd Newton, CEO of Apollo Endosurgery, said that the agency’s warning “does not indicate that the patient deaths were related to the Orbera device or the insertion procedures. … Apollo has received no product liability-related claims in connection with these five cases.”

Specifically, the FDA cautions that spontaneous over-inflation of the balloon is a potential risk for patients and can occur when too much fluid or air enters the device post-placement. A patient affected by over-inflation may experience extreme pain in the abdominal region, swelling of the abdomen, vomiting, or labored breathing.

Another potential danger occurs when the intragastric balloon compresses and covers other anatomy within the GI system; this can lead to acute pancreatitis, symptoms of which are pain in the abdomen and in the back.

These types of complications typically occur shortly after balloon placement and are resolved through removal of the device.

Both manufacturers have since updated their product labels to include risks of over-inflation and pancreatitis.

No definitive causal link has been made yet

Still, despite the specifics within the FDA’s risk warning, the agency had this to say in its letter: “At this time, we do not know the root cause or incidence rate of patient death, nor have we been able to definitively attribute the deaths to the devices or the insertion procedures for these devices (e.g., gastric and esophageal perforation, or intestinal obstruction).”

The FDA says that it is working with both manufacturers to learn more about these unanticipated deaths and the part the devices may have played. Furthermore, the initial approval for the intragastric balloons came with an FDA mandate that directed the undertaking of ongoing studies on how patients fare with the devices inserted, and therefore, additional information on safety and effectiveness is expected to be gleaned in that way.

The FDA recommends that physicians “closely monitor” patients treated with intragastric balloons and notify the agency of complications via MedWatch, the FDA Safety Information and Adverse Event Reporting Program. The FDA also promised to apprise the public of “significant new information” should it come to light.