Gov. Brown Reasserts Himself as Fierce Advocate of ACA for Californians 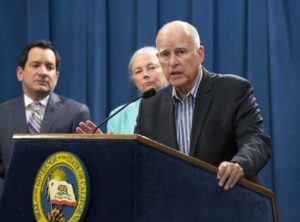 Many Americans are wondering what the Republican repeal of the Affordable Care Act will mean to them. Indeed, there are arguably millions of people across the country worried about whether they’ll have health insurance at all when the dust settles.

But California Governor Jerry Brown has promised the state’s residents that he will resist the Trump administration’s push to wrest ACA policies from the people.

Governor pledges “to protect the health care of our people”

In his annual State of the State address at California’s Capitol, Gov. Brown had this to say to legislators and appointees: “More than any other state, California has embraced the Affordable Care Act. I intend to join with other Governors and Senators, and with you, to do everything we can to protect the health care of our people.”

The duration of the 78-year-old governor’s speech was 16 minutes, but judging from the enthusiastic applause and standing ovations by state legislators, Brown’s words will linger in people’s awareness for far longer. He assured his audience that the state would not succumb to pressure from Washington and would not “turn back” progress made in healthcare. Brown called the future under new national leadership “uncertain,” and one in which “dangers abound.”

The purpose of the annual address is to give shape to the governor’s policy-focus for the coming year. In addition to vowing to protect the ACA for Californians, Brown also gave attention to the state’s inclusive immigration policy, the importance of renewable energy programs, and his support for reproductive healthcare for women.

“We’re going to fight for Planned Parenthood, which has been unfairly attacked in too many places in this country,” Brown said.

Under the ACA, access to health insurance has been expanded to include 5 million California residents via private health plans receiving federal subsidies and a greater availability of Medicaid (offered to those with financial need), called Medi-Cal within the state. The cost for this increased access? Around $20 billion.

The reality of federal funding not lost on Brown

Brown conceded that ACA coverage in California “has come with tens of billions of dollars from the federal government.” He went on to predict: “Were any of that were to be taken away, our state budget would be directly affected, possibly even devastated.”

Former chairman of the Assembly Health Committee, Assemblymember Rob Bonta (D-Oakland), expressed admiration for Brown, saying that he was impressed that the governor “came out swinging in strong defense of health, immigrants, [and] science.”

But state Democrats weren’t the only ones with a thumbs-up for Brown’s energetic speech.

In a written statement, Senate Republican Leader Jean Fuller (R-Bakersfield), said that reaching across the political aisle is vital when it comes to effectively communicating with individuals who shape national policies.

“Working with Washington should emulate the bipartisan successes we have had in our state,” Fuller wrote.

Others promise to join Brown in the “fight for our health”

In reaction to Brown’s speech, healthcare advocates articulated support through press releases and on social media sites, agreeing with the governor’s consternation over the potential loss of billions of dollars from the federal government when it comes to the repeal of the ACA, as well as worry over a proposal made by Congress to turn Medicaid into a state grant program.

Anthony Wright, the executive director of Health Access, had this to say in a statement: “We look forward to working with [Governor Brown] to fight for our health in Congress.”