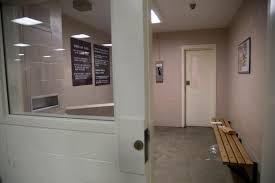 Randall Walker, Assistant Sheriff of Sonoma County, remembers when the county’s main jail opened in the early ’90s: there were a dozen or so inmates requiring psychiatric care. Today, however, at the same facility, there are more than 400 inmates getting some type of treatment for mental illness. Nearly 200 of those individuals have been remanded to housing dedicated to acute mental health conditions.

Walker says despite the fact that collectively all those inmates physically do “fit” in the facility, the reality of the large numbers dictates that the individuals must remain in their cells, and this prevents “proper programming” and other aspects of treatment.

To address this particular area of overcrowding, Sonoma County will soon break ground for a behavioral health unit slated to open in 2019; it will accommodate 72 inmates. The price tag? $44 million, with all but $4 million coming from state grants.

Beyond the six dozen beds the new unit will house, it will also include special flex space designated for education or therapy or other behavioral health-focused programs.

“Socialization’s a big part of it,” Walker said. “That’s what the new facility is going to give us. It’s going to be the perfect space to do programming, socialization, all the things that are important to treatment.”

Mental healthcare in the jail system: Is it enough? Or is it too little, too late?

“I see the jails doing what they can,” said Rachael McDavid, the head of Sonoma’s chapter of the National Alliance on Mental Illness. “They’re trying to be considerate of mental health challenges that people are going through, which many times can contribute to them ending up in jail.”

McDavid commends the county’s attempts to give this population more of what it needs, but she maintains that communities everywhere need to exert greater effort in keeping those struggling with mental illness from winding up in jail in the first place; for instance, through connecting them with entities and organizations that offer psychiatric care prior to incarceration.

“They have an episode, they have a crisis, because their mental health needs were not getting met,” McDavid said, “and so they get into bad situations. They make bad choices.”

Although they’re both in the Bay Area, San Francisco is miles apart on this issue

Kathleen Lacey is a San Francisco-based clinical social worker specializing in treating patients with violent criminal histories and severe mental illness. “Jails are just not treatment facilities,” she said. “No matter how nice you make it, it’s still run by the Sheriff’s Department, not by mental health professionals.”

Last December, a group protesting San Francisco’s plans to build a facility like Sonoma’s Behavioral Health Center vehemently interrupted a Board of Supervisors committee meeting (the committee was discussing funding for the project). Three protestors chained themselves to seats in the board’s chambers and were eventually removed by firefighters and Sheriff’s deputies.

Despite the unchaining, though, the protest accomplished at least something it set out to: the city turned down an $80 million grant from the state and tossed its Sonoma-similar plans entirely.

“San Francisco took a big bold move in saying, ‘No, we’re not going to build a new jail,’ ” Lacey said. “It’s unfortunate that that money is only being offered to build jails; it’s not being offered to build treatment facilities, and that’s where we constantly come down the line. There is a lot of money to incarcerate people, and the money for the treatment just doesn’t show up.”

Is the state shortchanging mental healthcare in the community at large?

Some patient advocates and healthcare providers argue that the state isn’t doing nearly enough at the community level, and whatever its efforts to provide psychiatric services to those individuals in custody, those efforts shouldn’t supplant consistent measures within the state’s communities.